Gasteig HP8 and the Isarphilharmonie are opening on 8 October 2021

Europe’s largest cultural centre presents its new home in the Munich district of Sendling. Valery Gergiev and the Munich Philharmonic are planning a whole range of celebrations to mark the centre’s official opening. 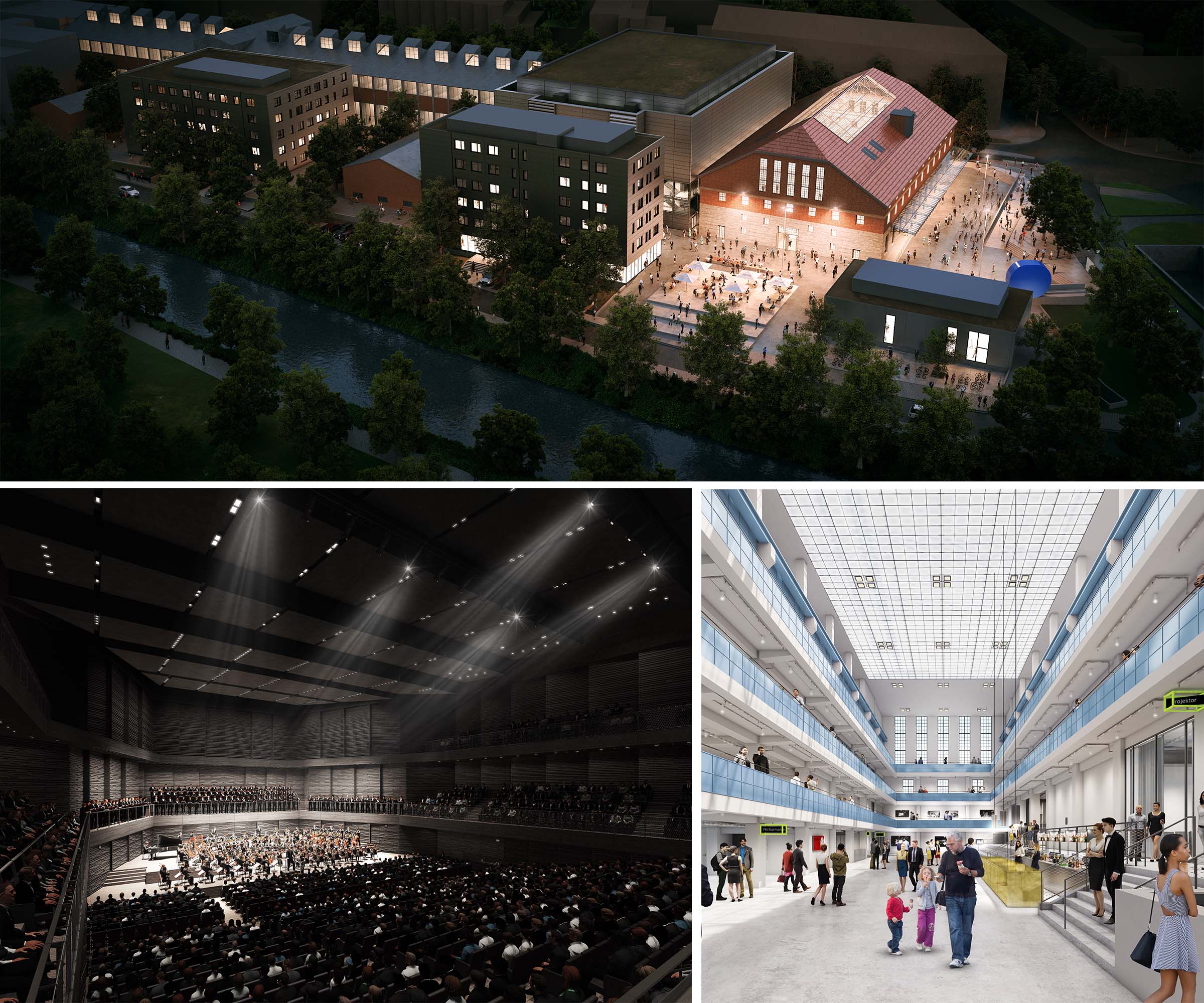 1,900 seats, an ultramodern modular wooden design, a team of leading international architects and an acoustic concept that is the work of the world-famous acoustician Yasuhisa Toyota: with the Isarphilharmonie the Gasteig and the City of Munich are offering concertgoers an exceptional new venue that is opening in the autumn of 2021 and that will effortlessly take its rightful place in the list of great international concert halls.

The Isarphilharmonie is a part of Munich’s new cultural quarter Gasteig HP8, named after its location on Hans- Preißinger-Straße. The collection of buildings, some of them old, others new, will house Europe’s largest cultural centre and its institutions while the Gasteig is being renovated. These institutions include the Munich Philharmonic, the Munich City Library, the Munich Adult Education Centre and the Munich University of Music and Performing Arts.

The new Isarphilharmonie is the work of the international firm of architects of Gerkan, Marg and Partners. Their designs have been realized by the Swiss NÜSSLI Group. Yasuhisa Toyota and his firm of Nagata Acoustics have brought decades of experience and expertise to the new hall, drawing on experience gained on previous projects that include the Elbphilharmonie, the Philharmonie de Paris and the Walt Disney Concert Hall in Los Angeles.

The Munich Philharmonic in a New Guise

With its move to the Isarphilharmonie the Munich Philharmonic is consciously opening a new chapter in the orchestra’s history. Its aim is to create openings, to be approachable and to reinvent itself. Its wide-ranging inaugural programme covers a ten-day period and showcases pianist Daniil Trifonov performing his first complete cycle of the five Beethoven piano concertos with the Munich Philharmonic and the Mariinsky Orchestra. But this is only the first of many such steps. Also planned is a range of special programmes, some of which will be undertaken with local artists and actors – neighbourhood concerts in unusual venues in Sendling, late-night events, a musical for the whole family, thematically focused festivals with surprising acts and new types of concerts that are being developed together with major figures such as Christoph Marthaler. Needless to add, visitors may also expect a top-notch programme of concerts with artists who are in demand all over the world and who include Zubin Mehta, Kent Nagano, Paavo Järvi, Yefim Bronfman, Barbara Hannigan, Isabelle Faust, Camilla Nylund, Lisa Batiashvili and many others, all of whom may be heard next season at the Isarphilharmonie. The sense of a new beginning may also be felt in the form of eight world premieres that the Munich Philharmonic will be presenting over the course of the season, with particular emphasis on specific themes in January.

Culture Behind Every Corner of the New Quarter

Visitors wanting to hear the Munich Philharmonic performing live at the Isarphilharmonie will access the venue via Halle E, a former transformer hall, a protected building that is at the heart of the entire centre. Here visitors will find all the information they need, together with key facilities, a gallery, a cinema, a café, a bar and, over several levels, the holdings of the Munich City Library. This library has been conceived as an innovative open library, as Gasteig HP8 sees itself as an inviting and informal meeting place for absolutely everybody.
Three other temporary structures house the Munich Adult Education Centre, a smaller hall for chamber recitals and
a restaurant, the University of Music and Performing Arts and a multipurpose function room. The Munich Chamber Orchestra will also be moving to this new quarter and joining the Gasteig family.
The ceremonies accompanying the opening of these interim quarters are not confined to 8 October. Rather, an extensive programme has been planned in the course of which each of the Gasteig institutions will become its patron for a month in order to give full expression to the diverse range of facilities on offer.

From May 20th, press kits will be available in the press sections of the Munich Philharmonic and Gasteig websites.
Find architectural renderings and photos of a recent visit to the building site in this folder. 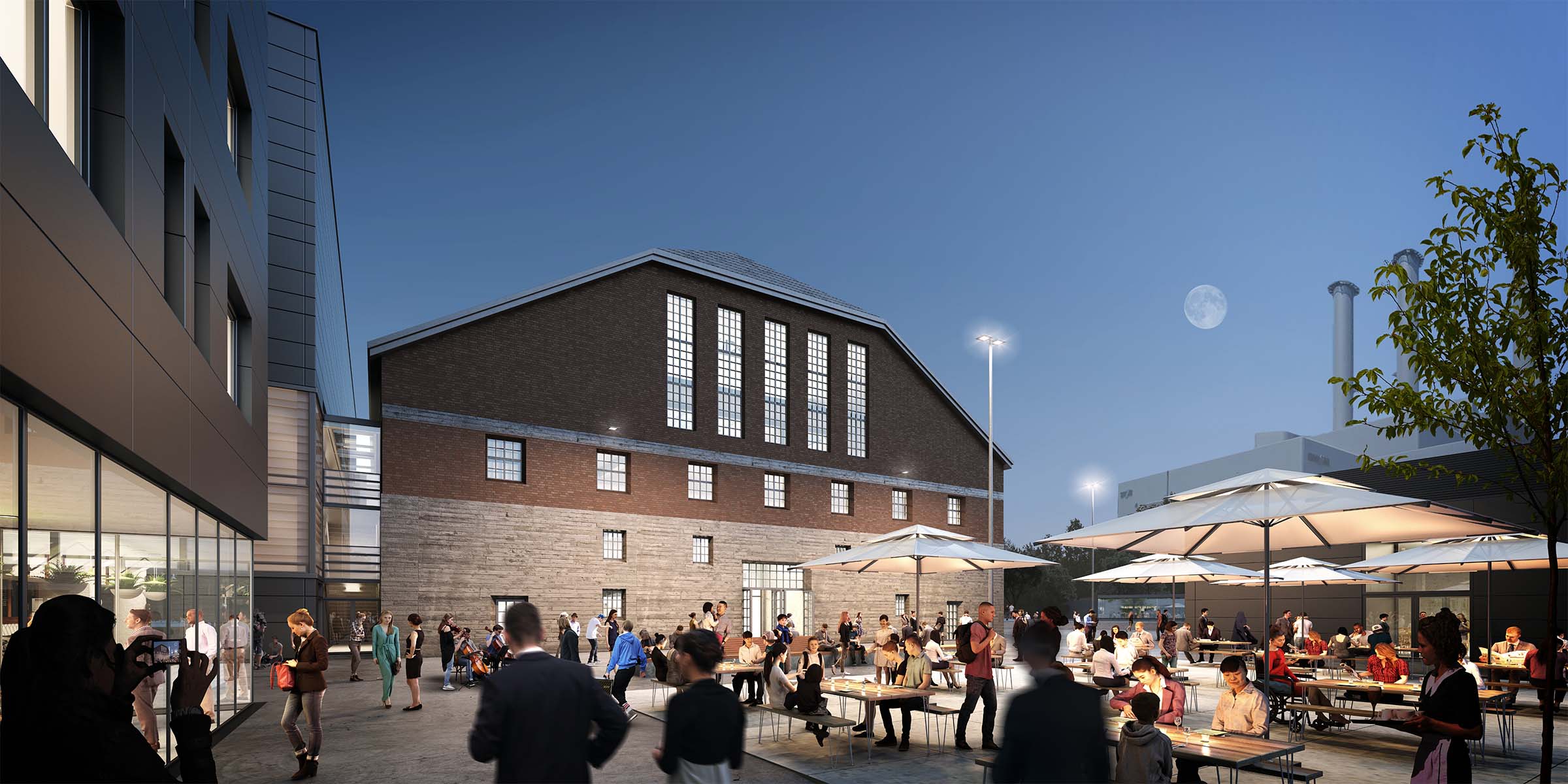 “The opening of Gasteig HP8 demonstrates once again that culture is writ large in Munich. Throughout the time that the Gasteig is being renovated, our city will have a new venue to provide inspiration and offer an exchange of ideas, expanding and leaving its mark on our cultural landscape in important ways.”
Dieter Reiter, Mayor of the City of Munich

“At Gasteig HP8, we want to show how we envision cultural participation at its very best. The ever-evolving needs of a diverse audience are our primary focus. We will meet them with new event formats, participatory approaches and the courage to experiment.”
Anton Biebl, Director of Munich’s Municipal Department of Arts and Culture

“With the Isarphilharmonie we are opening a ground- breaking concert venue with excellent acoustics. I am very much looking forward to some fantastic live events and to welcoming local music lovers as well as visitors from the whole world.”
Valery Gergiev, Principal Conductor of the Munich Philharmonic

“What can and should a place for cultural encounters look like today? How can we create a real sense of belonging together and a genuine exchange of ideas? We are very much looking forward to opening up new and unexpected perspectives on these questions in Sendling.”
Paul Müller, Intendant of the Munich Philharmonic

“It is already abundantly clear that the new cultural centre at Gasteig HP8, with the Isarphilharmonie at its heart, will radiate a spirit of freshness and innovation. The great variety of the Gasteig will be further enhanced by
the artists, craftsmen and craftswomen who will be based here. It is our great desire to be fully integrated into the neighbourhood and to work with others on manifold new projects.”
Max Wagner, CEO of Gasteig München GmbH

“The Isarphilharmonie has been designed to reflect the industrial character of this quarter of the city. As a result, the façades and walkways feature materials such as steel, glass, concrete and wood that have been left in their natural state. The concert hall owes its unique impact to its modular wooden design, its darker colours directing visitors’ attention to the events taking place onstage. Thanks to the outstanding contribution of Yasuhisa Toyota and his team, I am convinced that the hall’s acoustics will meet with the approval of international experts.”
Stephan Schütz, Partner with the architectural firm of gmp – Gerkan, Marg and Partners, responsible for designing this project