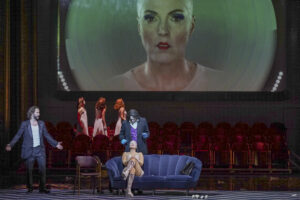 How do films like The Shining, A Star Is Born and Inland Empire fit together with Les Contes d’Hoffmann by Jacques Offenbach? One can be curious when Krzysztof Warlikowski, one of Europe’s leading opera and theatre directors, stages the work at the Greek National Opera. The three films inspired his interpretation of the work. Les Contes d’Hoffmann is the eagerly awaited new co-production of the Greek National Opera (GNO) with La Monnaie in Brussels, which will premiere in Athens on 18 December. Jacques Offenbach’s masterpiece will be performed in eight performances at the Stavros Niarchos Hall of the Stavros Niarchos Foundation Cultural Center (SNFCC) until 8 January, conducted by Lukas Karytinos. The world-renowned dramatic coloratura soprano Νicole Chevalier will take on the leading female roles, the rising British tenor Adam Smith sings Hoffmann. This production is made possible by a grant from the Stavros Niarchos Foundation (SNF) to increase the GNO’s artistic reach.

Not everything as it seems

Les Contes d’Hoffmann is one of the most popular French operas and ranks with Carmen, Faust and Manon – a dramatic operatic work with great melodies, including the famous Barcarolle. In Les Contes, Offenbach repeatedly allows his witty and playful side to emerge, and as in his other works, he remains unashamedly melodic and bristles with inexhaustible inventiveness. In this work, the composer shows the cheerful spirit of the poet E. T. A. Hoffmann on the one hand, and on the other, he lets us see that this poet’s personality is not what it seems at first glance. And although the composer always puts the melody in the foreground, his harmonic composition succeeds in capturing the essence of the characters and their situations with great precision.

The libretto by Jules Barbier is based on stories by the versatile German writer and composer E. T. A. Hoffmann, whom Barbier made the protagonist of the opera. Three female characters – the soulless automaton Olympia, the gravely ill singer Antonia and the courtesan Giulietta – each exhibit certain characteristics that together create the prima donna Stella, the woman Hoffmann falls in love with. The love he feels for each of them is destroyed in each case by an older man – in three different personalities: Coppélius, Dr Miracle and Dapertutto – whose different character traits are embodied by the wealthy Lindorf, with whom Stella departs at the end of the opera, leaving Hoffmann in despair.

Les Contes d’Hoffmann was the last opera by Jacques Offenbach, which the composer left unfinished at his death in 1880. Completed by the composer Ernest Guiraud, the work was performed to great acclaim at its premiere in February 1881 at the Opéra Comique in Paris. From the premiere at the end of the 19th century until 2010, when material thought to have been destroyed was discovered in the archives of the Opéra Comique, there have been numerous painstaking and persistent attempts to reconstruct the score – setting additional dialogue to music, inserting new sections into the work or even changing the order of the acts. As for the work’s epilogue – of which only drafts and notes by Offenbach have survived – each opera house essentially decides for itself what the finale should look like, choosing from the many different versions that exist.

The GNO presents the opera as it appears in the most recent critical edition of the work by Michael Kaye and Jean-Christophe Keck, in which the prologue and epilogue appear as separate acts, resulting in a five-act work. The final form of the work has been shaped by preparations for its performance in Brussels in 2019, conducted by Krzysztof Warlikowski and the conductor of La Monnaie performances, Alain Altinoglu.

The multi-award-winning director of this production, Krzysztof Warlikowski, is one of Europe’s most sought-after directors. In addition to his extensive work for the theatre – staging iconic works by Shakespeare and ancient Greek tragedies, as well as contemporary writers such as Sarah Kane – Warlikowski has been hailed as one of the most important reinventors of opera direction. The productions he has staged at Europe’s most important opera houses – Opéra national de Paris, La Monnaie in Brussels, Teatro Real in Madrid, Bayerische Staatsoper in Munich and Royal Opera House in London – and at leading festivals such as Aix-en-Provence and the Salzburg Festival have been hailed by critics and audiences alike as major artistic events because he has systematically explored his concept of the “re-theatricalisation” of opera.

Warlikowski’s staging of Les Contes d’Hoffmann is driven by the fact that this work by Offenbach has a particularly complex narrative and by the realisation that both the score and the libretto are without a stable structure. These elements give the director and the audience the sense that the work is open to reinterpretation and redefinition. In an evolution of his signature directing style, Warlikowski views the story of this opera through the prism of the seventh art, drawing inspiration from motion pictures. The emancipation of an enigmatic and complex woman, the disappointments of a crisis-ridden author, the addictions and subjective delusions – all lend themselves here to a metatextual exploration of the mysterious interplay between story and narrator, artist and artwork. Warlikowski reveals the essence of the work: time and space are but remnants of a crumbled mosaic.

The set and costumes of the production are by Warlikowski’s long-time collaborator Małgorzata Szczęśniak, who creates a unique cinematic universe. Choreography is by Claude Bardouil, lighting by Felice Ross, video design by Denis Guéguin and dramaturgy by Christian Longchamp.

Nicole Chevalier and Adam Smith in the title roles

Conducting is the acclaimed maestro and artistic director of the Athens State Orchestra Lukas Karytinos. The GNO choir director is Agathangelos Georgakatos. In this new production of Les Contes d’Hoffmann, the audience will have the opportunity to see and hear outstanding singers from Greece and around the world. Adam Smith – one of the most sought-after up-and-coming British tenors – will sing the title role in the first cast. He first sang the role of Hoffmann at the Opéra National in Bordeaux and has performed with great success at the English National Opera, the Glyndebourne Festival, the BBC Proms and the opera houses of Brussels, Antwerp and Seattle, among others.In the second cast, the title role is sung by the acclaimed GNO tenor Yannis Christopoulos.

Dramatic coloratura soprano Νicole Chevalier, who will embody the roles of Stella, Olympia, Antonia and Giulietta in the first cast, was awarded the German Faust Prize in 2016 for her interpretations of the four main female roles in Les Contes d’Hoffmann for the production at the Komische Oper Berlin, of which she was a member for five years. In the summer of 2019, she received international acclaim for her performance in Mozart’s Idomeneo at the Salzburg Festival, directed by Peter Sellars and conducted by Teodor Currentzis. Since then she has sung at leading European houses including the Royal Opera House in London, La Monnaie in Brussels (where she sang the four female leads of Les Contes d’Hoffmann in the premiere of Warlikowski’s 2019 production), Vienna, Hamburg and elsewhere. In the second cast, the work’s four main female roles will be sung by internationally acclaimed GNO soprano Vassiliki Karayanni.

In co-production with La Monnaie (Brussels)