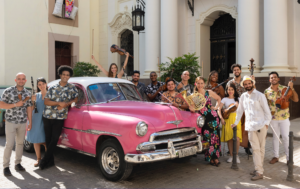 In 2020, Sarah Willis proved, in spectacular fashion, that Mozart compositions and mambo music are the perfect natural fit. Together with the Havana Lyceum Orchestra and conductor José Antonio Méndez Padrón, she took Mozart y Mambo to the top of the classical music charts and flooded social media channels with the album’s danceable rhythms – on Facebook alone, “Rondo alla Mambo” was viewed 8.5 million times. The recording combined popular solo pieces for horn by Wolfgang Amadeus Mozart with traditional Cuban music thus creating an intoxicating energy of musical styles which at first glance only seemed contrary. As The Guardian UK noted, “Willis’s generous musicianship is stamped on this entire project, in which Mozart … and mambo are gloriously joined at the hip”.

Mozart y Mambo: much more than just an album

For Sarah Willis, her ambitions for the transatlantic partnership which produced Mozart y Mambo were always significantly greater than just a recording project with a Cuban orchestra. In her multiple visits to Cuba previously, Willis had been so impressed with the quality and diversity of Cuba’s classical music scene that she wanted to raise awareness of it worldwide. An engaging documentary film about the project created by Deutsche Welle helped realise that vision. Part of the proceeds from the album’s CD sales went to purchase new instruments for Cuban musicians, so the orchestra now sounds better than ever. Awarded an MBE (“Member of the Order of the British Empire”) in 2021 by Queen Elizabeth II for services to classical music, Willis considers this honour to be partly in recognition of her work in Cuba.

“If you can’t dance it, you can’t play it” – Mozart y Mambo Part Two

Now, two years after the phenomenal success of the first album, Sarah Willis and the Havana Lyceum Orchestra continue their inspirational journey. For Mozart y Mambo – Cuban Dances, scheduled for release in September 2022 by Alpha Classics, Sarah Willis has commissioned the world’s first Cuban horn concerto. Six Cuban composers have written six dances for solo horn, strings and percussion to create this work. These are inspired by traditional dance rhythms from different regions in Cuba and together they form the six movements of the horn concerto “Cuban Dances.”

As Willis explains, “With ‘Cuban Dances’ we have created a musical map of Cuba and its musical history. Preparing and recording the dances – Son, Danzón, Guaguancó, Bolero, Cha-cha-chá and Changüí – was one of the greatest musical challenges I have faced so far, due in no small part to the technical demands of the horn solos. But as my Cuban friends say, ‘If you can’t dance it, you can’t play it.’ How right they were!”

Mozart y Mambo – Cuban Dances, of course, also features music by Mozart in the form of the Horn Concertos No. 1 in D major and No. 2 in E-flat major. Just like the previous release, Willis and the Havana Lyceum Orchestra recorded the works late at night in a church to avoid capturing Havana’s noisy day time life on the recording.

The excitement of the first part of Mozart y Mambo was captured on film by Deutsche Welle; now a second, very special, film project has been created: Sarah Willis and the orchestra perform the individual dances from the “Cuban Dances” at their respective places of origin in Cuba, accompanied by a camera team. The films from this unique music-historical road trip will appear on ARTE in the autumn of 2022. Viewers will experience the mutual appreciation between the Cuban musicians and Sarah Willis, demonstrating that the love of music knows neither cultural nor human boundaries.

In October, experience Mozart y Mambo live as Sarah Willis and the orchestra bring this project to Europe with concerts in Salzburg, Munich, Wiesbaden and Berlin.

You can find out more about the Mozart y Mambo project here. 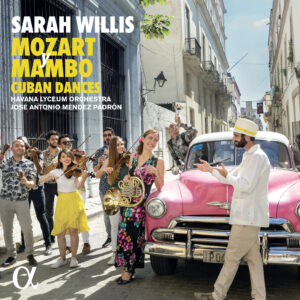 Mozart y Mambo: Cuban Dances
will be released by Alpha Classics in September 2022