Mozart’s opera masterpiece Don Giovanni is coming to the Stavros Niarchos Hall of the Greek National Opera at the SNFCC for five performances, from 21 October. This major international GNO co-production with the Gothenburg and Copenhagen opera houses premiered online on GNO TV (Athens) during the 2020/21 Season. Subsequently presented to great success in Copenhagen, Denmark in 2022, the work is set to be presented in Gothenburg, Sweden in 2023. Conducted by Ondrej Olos, the production has been staged by the acclaimed stage director –and former Artistic Director of the Royal Danish Opera– John Fulljames. Internationally renowned Greek baritone Dionysios Sourbis appears in the title role. This production is made possible by a grant from the Stavros Niarchos Foundation (SNF) to enhance the GNO’s artistic outreach. 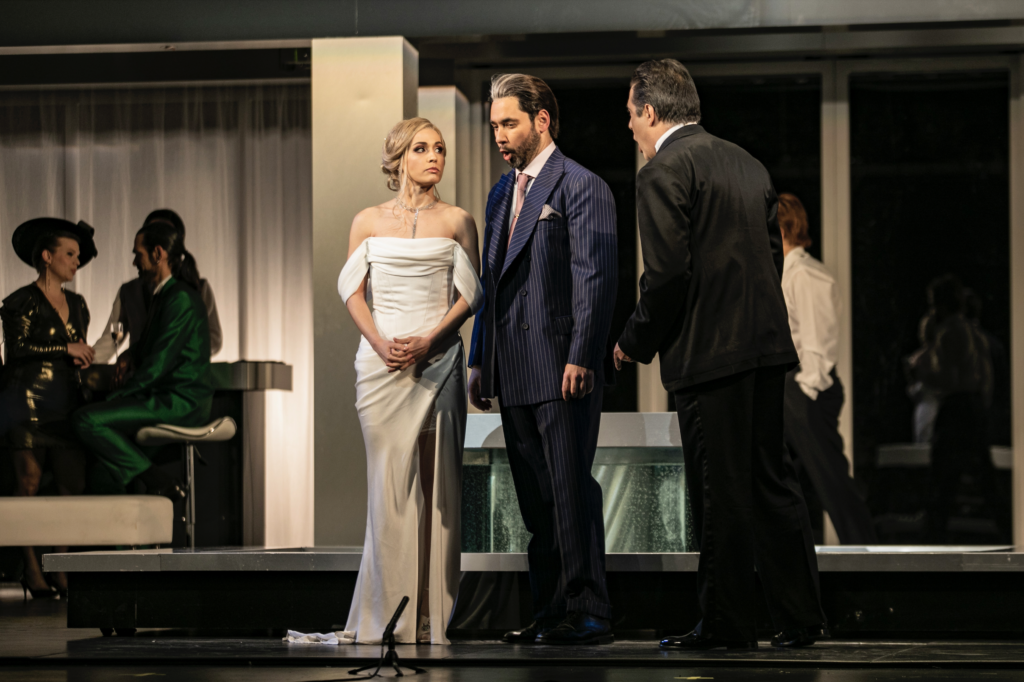 In Don Giovanni –a seminal work in the opera repertoire– Mozart imbued his music with every possible perspective on the path followed by a man who decides to defy God and take his fate firmly into his own hands. The plot tackles the sexual escapades of the rakish Spanish nobleman Don Giovanni. It is on one of these misadventures that he attempts to rape Donna Anna. While making his escape, he kills her father, who returns from the dead to take his revenge. Utterly unrepentant in the face of everything he has done, Don Giovanni is led down into hell.

John Fulljames, the former Artistic Director of the Royal Danish Opera, has served as Associate Director of Opera for the Royal Opera in London, and was the founder and Artistic Director of the Opera Group. He has directed productions at the world’s major opera houses, including La Scala in Milan, Covent Garden in London, Teatro Real in Madrid, the Liceu in Barcelona, and Théâtre du Châtelet in Paris. The director –who here sets the action in a modern-day hotel; a city in microcosm where what’s private is made public, and your stay is strictly limited– notes the following about the production: “Death runs like an atmosphere through Don Giovanni – most obviously the Commendatore dies, but Donna Anna contemplates taking her own life, Ottavio says he is willing to sacrifice his life to revenge her, Leporello is almost killed, Masetto is almost killed, we are fearful for Zerlina… But of course the death which is the long-awaited and trailed climax of the opera is that of Don Giovanni himself –it becomes inevitable and even wished for by him as he chooses death, hell even, over denying who he is– as the individualistic threat of total, unrestrained liberty which he represents can only be vanquished by his death. His death is an expression of order reasserting itself. All trace of him is wiped away and society continues. A miniature version of this re-statement of order occurs every time that we leave a hotel; as our rooms are fumigated and made new again to create once again the illusion that a new occupant will, tonight, be the first occupant. Hotels are stages on which we enact lives in defiance of mortality. Our mess is cleared away, no actions have consequences and there are clean sheets every day.
Hotels are resonant in other ways; they are places where different people and classes encounter each other – whether for a civic event, a wedding where the family are spending their life savings, a long-term wealthy resident, a traveller visiting a city. Places where there is both intimacy and anonymity, both private and public spaces. Places where much of the function is oriented around what happens after dark. But above all they are places which one day we must check-out of. So please make yourself at home, check in, collect your room key, lock up your valuables and leave behind the world outside.”

The production is conducted by the internationally acclaimed maestro Ondrej Olos, known to Greek audiences from his previous collaborations with the GNO on the Janáček operas The Cunning Little Vixen and The Makropulos Affair. This all Greek cast is offering us the chance to see and hear both established and emerging GNO soloists. In the title role is the baritone Dionysios Sourbis, and performing alongside him are the sopranos Cellia Costea (Donna Elvira), Myrsini Margariti (Donna Anna), and Miranda Makrynioti (Zerlina), the tenor Vassilis Kavayas (Don Ottavio), the bass Petros Magoulas (The Commendatore), the bass-baritone Yanni Yannissis (Leporello), and the baritone Nikos Kotenidis (Masetto) 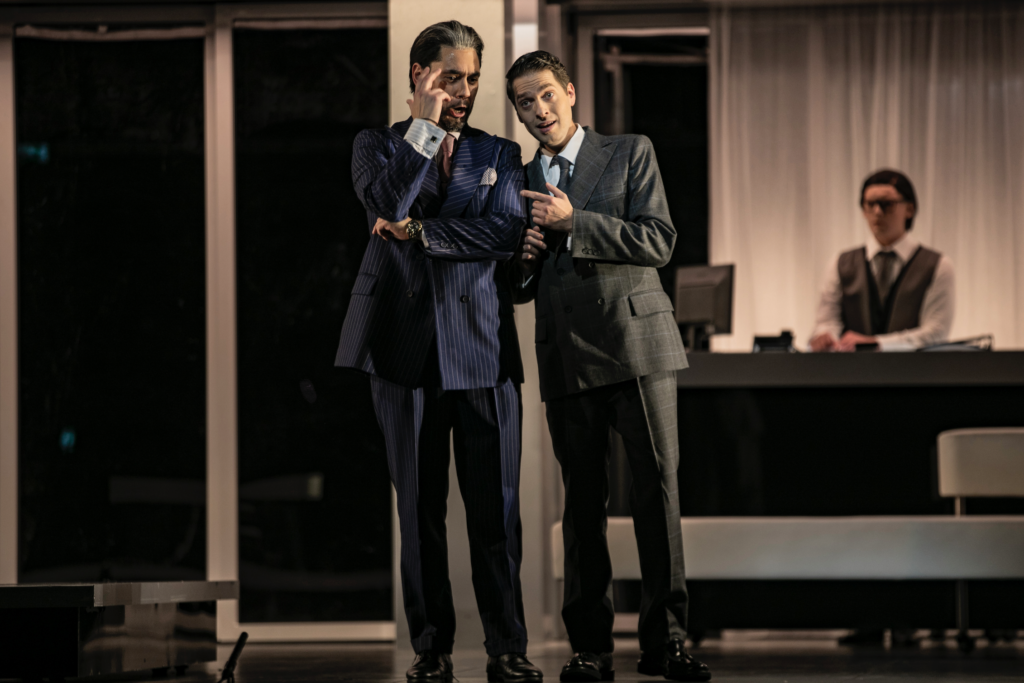 Don Giovanni at a glance

The composer / There is no doubt that Mozart was a great intellect, and one of the most important, restless, and interesting personalities of his time – a charismatic and sensitive man of high ideals. Day by day, contemporary musicological research is adding pieces to the puzzle that comprises the portrait of the composer, constantly uncovering new and ever more thrilling facets of his life.

The work / Don Giovanni is an opera in two acts. The libretto by Lorenzo da Ponte was based on an earlier version by Giovanni Bertati for the Giuseppe Gazzaniga opera Don Giovanni o sia Il convitato di pietra, first performed in Venice in 1787.

Comedy or drama? / Da Ponte labelled his libretto a dramma giocoso, a term that describes a dramatic piece with comic elements. Mozart himself noted the work in his catalogue as an opera buffa – a comic work. Beyond the substantial elements of structure and musical characterisation that clearly classify the piece as a comic opera, musicologists now agree that, in its time, the term dramma giocoso simply meant a musical comedy, and as such was not discernibly different from the term opera buffa. In Mozart’s time, such terms were not used with the same fastidiousness insisted upon today.

Premieres / Don Giovanni was first performed on 29 October 1787 at the Estates Theatre in Prague (renamed for a time as the Tyl Theatre), a venue affiliated with the National Theatre from 1948. For the opera’s Viennese premiere (7 May 1788), Mozart adapted the score for the new singers, composing new pieces for certain roles and removing other sections. Don Giovanni entered the repertoire of the Greek National Opera on 30 March 1962, with a production conducted by Antiochos Evangelatos that showcased Kostas Paskalis in the title role. This new GNO co-production presents the original Prague version of the opera.

Synopsis of the original opera

Act I / Night. Outside the home of the Commendatore, Leporello –Don Giovanni’s servant– is waiting for his master, who is inside attempting to rape the Commendatore’s daughter, Donna Anna. The moment Donna Anna realises, in spite of the darkness, that this man is not her fiancé Don Ottavio, she calls for help and chases after her would-be rapist. Her father rushes to her defence. In the short duel that follows, Don Giovanni kills her elderly father and escapes without being recognised. Donna Anna and Don Ottavio swear to avenge this crime. Donna Elvira, one of Don Giovanni’s previous victims, comes looking for him. The moment he recognises her, Don Giovanni makes his escape. Running into a wedding party, he attempts to separate Zerlina from her future husband Masetto in order to seduce her. Donna Elvira intervenes, however, thwarting his plan. Donna Anna and Don Ottavio ask Don Giovanni to help them find the Commendatore’s killer. The words they exchange lead Donna Anna to recognise his voice and realise that Don Giovanni is her father’s killer. Don Giovanni invites all the wedding guests to a feast. Donna Elvira, Donna Anna, and Don Ottavio arrive there in disguise. Don Giovanni attempts to seduce Zerlina once more, who this time calls for help. Don Giovanni tries, unsuccessfully, to place the blame on Leporello. Caught in a bind, master and servant nevertheless manage to escape.

Act II / Fed up of these escapades, Leporello threatens to leave his master’s service. Don Giovanni convinces him instead to put on his clothes as a disguise and seduce Donna Elvira, so that he will be left to seduce her maid in peace. This plan is foiled, however, when Masetto and his friends appear. Don Giovanni manages to wrong foot this posse, sending them off on the wrong path before beating Masetto up. Donna Elvira and Leporello, who is wearing Don Giovanni’s clothes, meet with Donna Anna, Don Ottavio, Zerlina, and Masetto. Thinking they have Don Giovanni in their hands, the four attempt to kill him but Leporello manages to escape. In a cemetery, Don Giovanni and Leporello suddenly come across the grave statue of the Commendatore. Brimming with arrogance, Don Giovanni invites him to dinner – and the statue accepts. Don Giovanni dines, waiting for the Commendatore. Donna Elvira arrives, who urges him one last time to renounce this life of debauchery and mend his ways. The statue of the Commendatore arrives and demands that Don Giovanni atone for his sins. He refuses. His punishment: the fires of hell. Acknowledging that all evildoers go to hell, the rest of the characters announce their plans for the future: Zerlina and Masetto will live in marital bliss, Donna Anna will delay her marriage to Don Ottavio until after a period of mourning, Donna Elvira will withdraw from society and enter a monastery, and Leporello will seek out a better master. 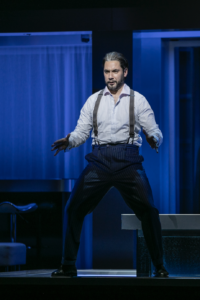