The Greek National Opera (GNO) is presenting an impressive programme with its forthcoming 2022/23 season and at the same time underlining its continuing rise as a Mecca for opera lovers from all over the world. 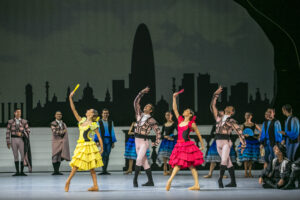 For the new opera productions, the Artistic Director of the Greek National Opera, Giorgos Koumendakis, has been able to attract top-class directors such as Krzysztof Warlikowski for Offenbach’s Les Contes d’Hoffmann, David McVicar for Cherubini’s Médée, Olivier Py for Puccini’s Madama Butterfly and Stephen Langridge for Verdi’s Falstaff amongst others.

The GNO is also planning two new ballet productions as well as a number of major co-productions with leading opera houses, most notably the Metropolitan Opera in New York and the Opéra Comique in Paris. A new work, commissioned by the GNO, will also be having its world premiere as part of the 2022/23 season: Andrei, an original opera by Dimitra Trypani on the singular filmmaker that was Andrei Tarkovsky.

In March 2023 Anita Rachvelishvili will be making her role debut as Charlotte in Massenet’s Werther and Anna Pirozzi her role (and house) debut as Médée in April 2023. Sophisticated opera productions set against the breath-taking panorama of Athens at night: in summer 2023 the GNO will be presenting Madama Butterfly and Nabucco in the Odeon of Herodes Atticus at the foot of the Acropolis.

“Our 2022/23 season programme distils and encapsulates all the objectives I set out when appointed Artistic Director of the Greek National Opera in early 2017. Longstanding plans to expand the Greek National Opera’s repertoire have now been realised to form a core strand of our recent programming that has borne exceptional fruit and resonated deeply with audiences. This season’s international co-productions are the result of efforts invested over a number of years to substantially enhance the profile and calibre of the GNO. Also this year, three opera masterpieces not seen in decades will take their place once more within the GNO repertoire: Verdi’s ‘Falstaff’, ‘Bluebeard’s Castle’ by Bartók, and Cherubini’s ‘Médée’, alongside a work never before presented by our opera house – Offenbach’s ‘Le voyage dans la Lune’. In the wake of some 90 works commissioned in recent years from Greek composers for our two stages, and for our online festivals, this year sees yet another original production staged inside the Stavros Niarchos Hall: Andrei, an ambitious new work by Dimitra Trypani, with a libretto by Pantelis Boukalas, about the singular filmmaker that was Andrei Tarkovsky.”

The Greek National Opera is now entering its sixth season in its new home: the Stavros Niarchos Foundation Cultural Center (SNFCC).  Based on plans by the leading architect Renzo Piano, the project was completed in 2017 and donated to the Greek State by the Stavros Niarchos Foundation (SNF). According to the Berlin-based Tagesspiegel, the building is a “blueprint for the twenty-first century’s new opera-house ideal in terms of its architectural conception”. Its exemplary character is also underlined by its ecological aspects. A complex of glass, steel and concrete, it contains not only the 1,400-seat opera house but also the National Library, while its grounds include a park. And the view from the roof of the building offers a panorama of the bright shimmering blue of the Saronic Gulf.

GNO’s new season is made possible by a grant from the Stavros Niarchos Foundation (SNF) to enhance the GNO’s artistic outreach. Andreas Dracopoulos, Co-President of the SNF, is excited about the development of the Greek National Opera, he says:

“A turning point in its history came in 2017 when the GNO relocated to a new state-of-the-art building at the architecturally striking Stavros Niarchos Foundation Cultural Center (SNFCC), which was conceived, designed, constructed, and equipped with a substantial grant from the Stavros Niarchos Foundation (SNF). Following completion, the SNFCC was delivered to the Greek state and the public in February 2017 through the SNF’s largest grant initiative to date, totalling €618 million. Assisted by a €5 million grant from the Stavros Niarchos Foundation (SNF), the GNO relocated from Athens’ Olympia Theatre to the SFNCC and the two, purpose-built theatres designed by Renzo Piano, doubling its audience capacity to 1,400 seats in the opera hall and also doubling its ticket revenues.”

Tickets for the September–December 2022 productions go on sale 29 July 2022, and can be bought from the GNO Box Office and online via ticketservices.gr/en.