20-year-old Japanese violinist Hina Maeda recently won the International Henryk Wieniawski Violin Competition – now the margin she won by, measured over all three rounds, is also clear. Starting recently, all points awarded by the jury are publicly available on the competition website. Hardly any other music competition is so transparent. 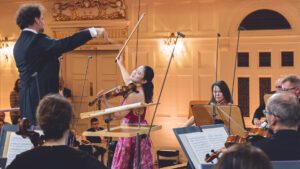 She received 94.05 points, the runner-up Meruert Karmenova from Kazakhstan 88.32, the third-placed Qingzhu Weng (China) 87.71. The Wieniawski Competition is thus a pioneer on the international music scene. The publication of the points, which was stipulated in advance in the jury regulations, can counteract attempts at manipulation on the part of the jurors.

The director of the competition, Karolina Kaźmierczak, explains: “We have had very good experiences with the publication of the points, the jury was able to handle it very well. I can only recommend it to every competition to have so much transparency. We have received a lot of positive feedback on it overall.” Jury president Augustin Dumay reports the following: “The collaboration between the Members of the Jury was extremely cordial, it reflected its diversity, and was structured according to the will of the Administration of the Competition and my will as Chairman of the Jury, establishing a certain number of new rules concerning the composition of the Jury, the transparency, proven by the disclosure of the votes and scores of each Member of the Jury after the Competition, and this very radical and essential ethics has been accepted by all. This framework has allowed us to avoid a lot of problems that can often appear without one in place.”

The fact that the competition was not only a great success in terms of transparency and thus fairness, but also with the public, is indicated by the click numbers of those who followed the competition via the internet. On the YouTube channel of the Wieniawski Society, more than one million views were recorded, which is an increase of more than 1000 percent compared to the previous competition in 2016. The number of followers on Instagram even grew so quickly that Instagram blocked access to the account for a day for fear of illegal activity. Over 100,000 interested people watched via the fanpage of  the US website “The Violin Channel”. In China, too, many people followed the Wieniawski Competition: more than 1.3 million people tuned in on various channels.

More than 100 journalists were on site in Poznań. TVP, the public television in Poland, accompanied the competition, as did Polish radio. In total, the three public rounds attracted more than 12,000 spectators to the auditorium of the University of Poznań.

The next Wieniawski Violin Competition will take place in 2026.

Click here for the points awarded in the 1st round.

Click here for the points awarded in the 2nd round.

Click here for the points awarded in the 3rd round and the final results.