Nézet-Séguin and The Philadelphia Orchestra 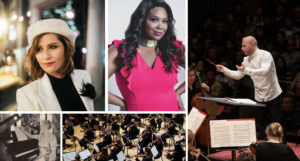 In its ongoing commitment to creative equity and inclusion in the world of orchestral music, The Philadelphia Orchestra will perform works never and rarely heard in concert in the tour locations, including Florence Price’s Symphony No. 1 (premiering in Edinburgh, Hamburg, Berlin, and Lucerne), for which the Orchestra’s Deutsche Grammophon recording won the 2022 GRAMMY for Best Orchestral Performance; the European premiere of Valerie Coleman’s This Is Not a Small Voice, a Philadelphia Orchestra commission performed by Blue to the text of Sonia Sanchez’s poem of the same name; and selections from Leyendas: An Andean Walkabout by Philadelphia Orchestra Composer-in-Residence Gabriela Lena Frank (only previously performed in Europe in Finland and Sweden). In addition, the Orchestra will present works by Beethoven, Dvořák, and Rachmaninoff. Batiashvili will perform Szymanowski’s Violin Concerto No. 1, Chausson’s Poème, and Saint-Saëns’sIntroduction and Rondo capriccioso. Blue will perform Barber’s Knoxville: Summer of 1915 in addition to the Coleman work.

“It is fitting—and thrilling—for the Orchestra to return to international touring with performances at Europe’s most esteemed festivals and concert halls,” said Nézet-Séguin. “Together with our dear friends Lisa Batiashvili and Angel Blue, we look forward to reuniting with audiences overseas and sharing with them an authentic representation of who we are, through music that reflects our diverse world. It is particularly special for us to perform Florence Price’s Symphony No. 1 in cities where it has never before been heard. This symphony is near and dear to our hearts and we hope it will become a staple in the classical music canon worldwide.”

In addition to the full Orchestra concerts, Yannick will join a chamber concert with musicians of the Orchestra on August 25 at Queen’s Hall in Edinburgh, to be broadcast live on BBC Radio 3. The program will feature Yannick at the piano for Mozart’s Piano Concerto No. 12 (in its version for piano and string quartet) and a performance of Mozart’s Clarinet Quintet.

Click here for a complete listing of concert information.

“There’s nothing like that moment of connection and contemplation, when you’re standing in the Arena at the Proms in front of one of the truly great world orchestras, as I did as a teenager growing up in London hearing The Philadelphia Orchestra perform live for the first time,” said Matías Tarnopolsky, president and CEO of The Philadelphia Orchestra and Kimmel Center, Inc. “It is so special now to return to the Proms, as well as to each of these iconic European festivals and concert halls, with Yannick and the Orchestra performing masterworks alongside important premieres that together show the breadth of the repertoire. We look forward to creating lifelong memories for audience members like the ones I still carry with me to this day.”